How Honest Are You With Your Doctor?

Honesty typically is the best policy, especially when you're at the doctor's office. Much of a medical professional's diagnosis will depend on what you say – or don't say. Although test results offer your doctor important insights, the information you share during your exam can heavily influence your care. Does having open and honest conversations with your doctor come naturally to you? You might be surprised to find out that's not the case for everyone.

We spoke to 1,000 people from across the U.S. about how truthful they are when talking to their doctors. Because results were collected anonymously, we were able to get a more transparent view into how—and why—people fudge the truth in the doctor's office. Respondents admitted what they had been dishonest with their physicians about. We also explored whether patients feel more comfortable being honest in virtual doctor appointments compared to traditional, in-person sessions. If you're curious about who is most likely to fib during a physical, why people lie to their doctors and how evolving technology is impacting our openness with medical professionals, read on.

Our study began with a peek into how honest patients are with their doctors, which we then crossed against generations to reveal some startling differences. 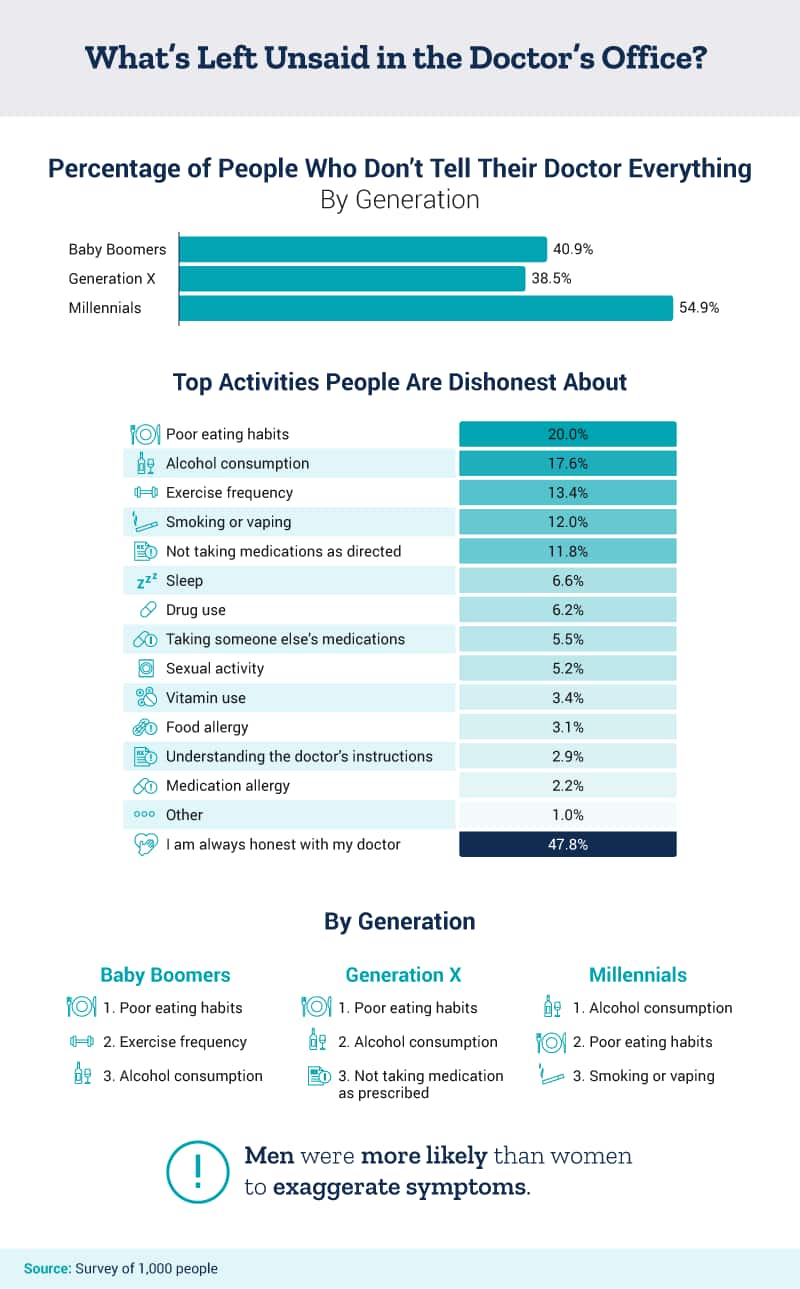 Overall, less than half of participants were able to say they were always honest with their doctors. Millennials were the most likely to report not telling their doctor everything (54.9%), but 38.5% of Gen Xers and 40.9% of Baby Boomers also admitted to some selective truth-telling.

What do we most often lie about? Poor eating habits, followed by alcohol consumption: we want our doctors to believe we are salad fiends and rare drinkers. This is concerning because poor nutrition can contribute to a number of health consequences. It's important to get a doctor's guidance on your diet–the foods you actually eat–because going at it alone can be confusing. Eating habits can take time to change, and a doctor equipped with accurate information about your nutrition can guide you towards vitamins and supplements to ensure you are consuming the necessary nutrients for good health.

As for alcohol—the topic Millennials were most likely to lie about—there are risks of vitamin E deficiency even with moderate consumption. In addition, heavy drinking can increase the risk of certain cancers, pancreatitis, liver disease and other health problems.

Across all generations and genders, one topic patients struggle to be open about is sex. As one 42-year-old woman said, "I've hesitated to [discuss] sexual questions with my doctor." Men shared these emotions as well. One 34-year-old man explained, "I've been too embarrassed to ask about STIs, such as herpes."

The "Why" of the Lies

So why do patients lie? Usually, it's because they're embarrassed and are worried their doctors will judge them. Millennials in particular are worried about getting a finger-wagging lecture from a doctor. The majority of people who don't tell the truth during their exams do later regret it. What can doctors do to elicit more honesty from their patients? Bedside manner and a nonjudgmental presence can be important to patient care and instilling trust. 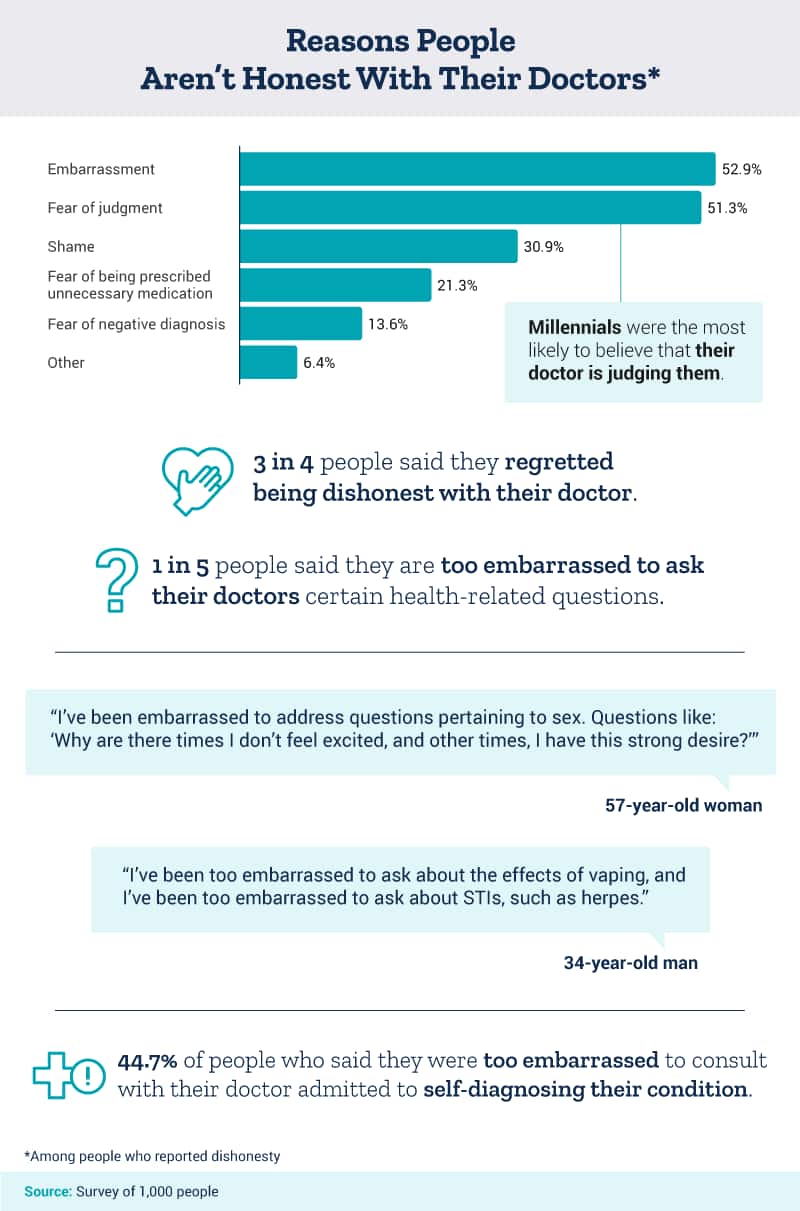 Are Patients More Likely to Lie in Person or in Virtual Exams?

Honesty appeared to improve with distance, or when patients met with their doctors virtually vs. being scrutinized in the exam room. More than three-quarters of respondents (79.4%) said they would be equally or more honest with their doctor if the appointment was virtual, rather than in person. And among those that had been dishonest at the doctor's office before, 30% agreed they would be more transparent in an online appointment. 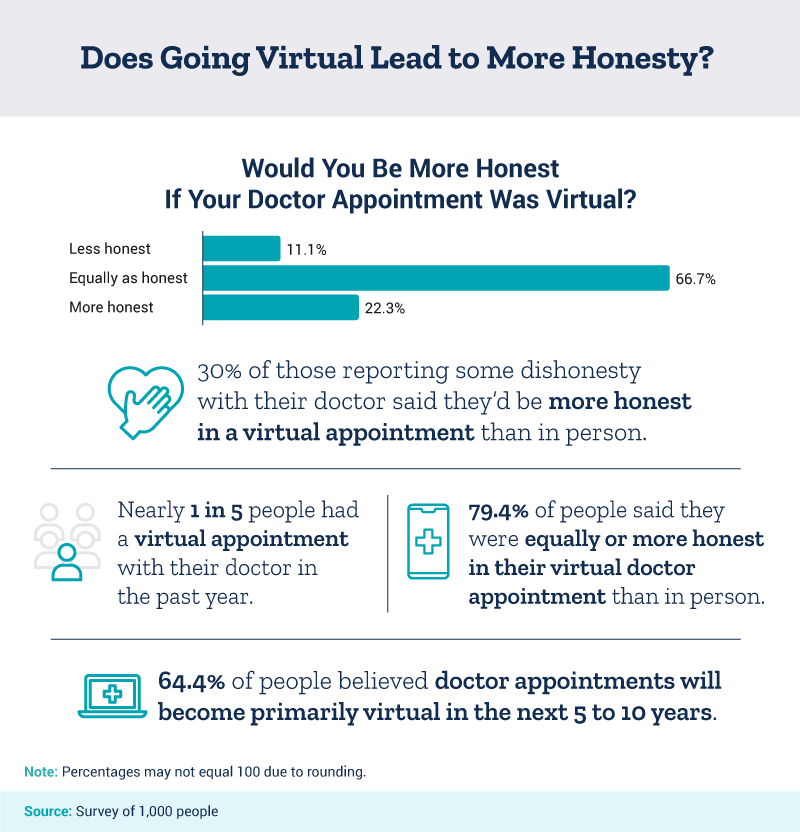 Though these virtual doctor-patient meetings recently have increased out of necessity, their continuity may ultimately be born out of preference. And most respondents saw the future continuing this way: 64.4% believed doctor appointments will become primarily virtual within the next five to 10 years.

What Do Patients Really Think About Their Doctors?

Though this study primarily focused on people's honesty with medical professionals, we also wanted to know how patients perceived the validity of their doctor's words. Surprisingly, nearly half of patients (45.9%) saw their doctor's healthy lifestyle advice as "suggestions" rather than mandatory. We're much more likely to take medicine prescribed for a condition than we are to take steps suggested for us to avoid getting that condition in the first place. 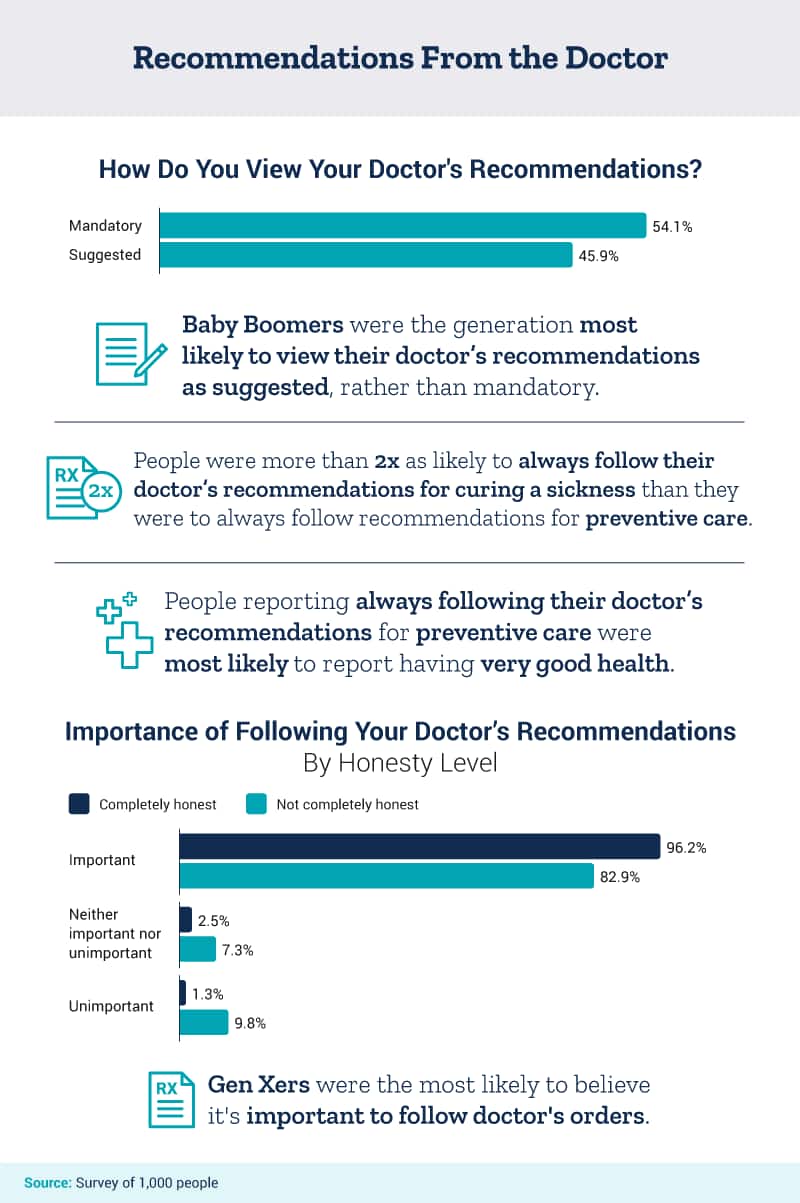 Your doctor can help you navigate preventive measures–whether it's an exercise regimen or vitamins and supplements that support gaps in your nutrition.

One interesting pattern: lying to your doctor appears to go hand-in-hand with ignoring your doctor's recommendations. People who reported being dishonest with their doctor were more than seven times as likely to think it's unimportant to follow doctor recommendations.

The Consequences of Lying

Lying isn't just a moral issue—it's a medical one as well. Nearly 16% of people said they had faced a negative consequence from being dishonest with their physician. Of those reporting a negative consequence, nearly 70% said they experienced a worsened medical condition due to that misinformation. Moreover, 44.7% of people who were too embarrassed to be honest veered to self-diagnosing. 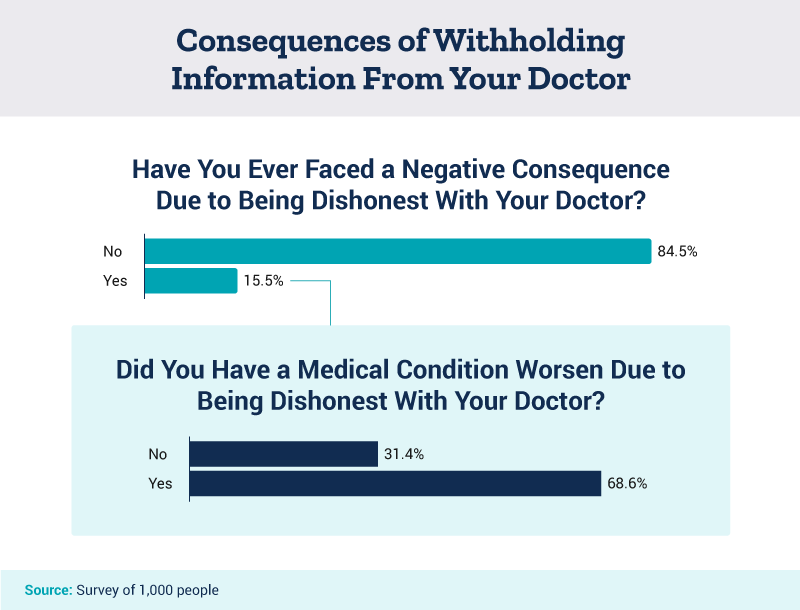 Though the data revealed some concerning statistics, it also revealed that we're entering a new era where virtual health appointments may make us all more open about our health conditions, challenges and questions.

The science of a healthier life is ultimately our mission at Life Extension. Enhance your wellness and get a free phone consultation with our Wellness Specialists—doctors, registered dieticians, licensed nurses, chiropractors and other health experts.

We surveyed 1,000 people who reported having an appointment with their doctor in the last year. Respondents consisted of the following groups:

People were asked to report how honest they are with their doctor. They were given the following scale of options:

In our final visualizations of the data, people who answered anything other than “completely honest” were grouped as being dishonest with their doctor.

Questions about the activities people are dishonest about with their doctors and their reasons for being dishonest were check-all-that-apply questions. Therefore, percentages won’t add to 100.

When asked how their level of honesty would be impacted in a virtual appointment compared to an in-person appointment, people were given the following scale of options:

In our final visualization of the data, these were grouped in three broad categories: less honest, neither less nor more honest, and more honest.

Respondents were asked how important they think it is to follow their doctor’s recommendations. They were given the following scale of options:

In our final visualization of the data, these were condensed into the following groups: unimportant, neither unimportant nor important, and important.

The data we are presenting relies on self-report. There are many issues with self-reported data. These issues include, but are not limited to, the following: selective memory, telescoping, attribution and exaggeration.

No statistical testing was performed, so the claims listed above are based on means alone. As such, this content is purely exploratory and future research should approach this topic in a more rigorous way.

How Honest Are You With Your Doctor?