Exploring the Changes of Menopause

"Aging is not 'lost youth' but a new stage of opportunity and strength," Betty Friedan said famously. But there comes a time in women's lives where age starts to take a physical and mental toll on the body, known as menopause.

To better understand the impact of this milestone, dietary supplement manufacturer Life Extension conducted a survey of more than 500 menopausal and postmenopausal women. The responses collected suggest that this phase is about so much more than the end of childbearing years. Menopause brings with it transformations in how women see themselves, figuratively–and literally, as their bodies begin to change shape and size with the hormonal fluctuations. Those infamous hot flashes are real—but they're also just the tip of the iceberg.

Read on as we explore the most common (and most challenging) symptoms of menopause, question the lore that "whatever your mother went through will be your experience," and look at how women handle their symptoms through medicine and natural options such as vitamins and supplements. 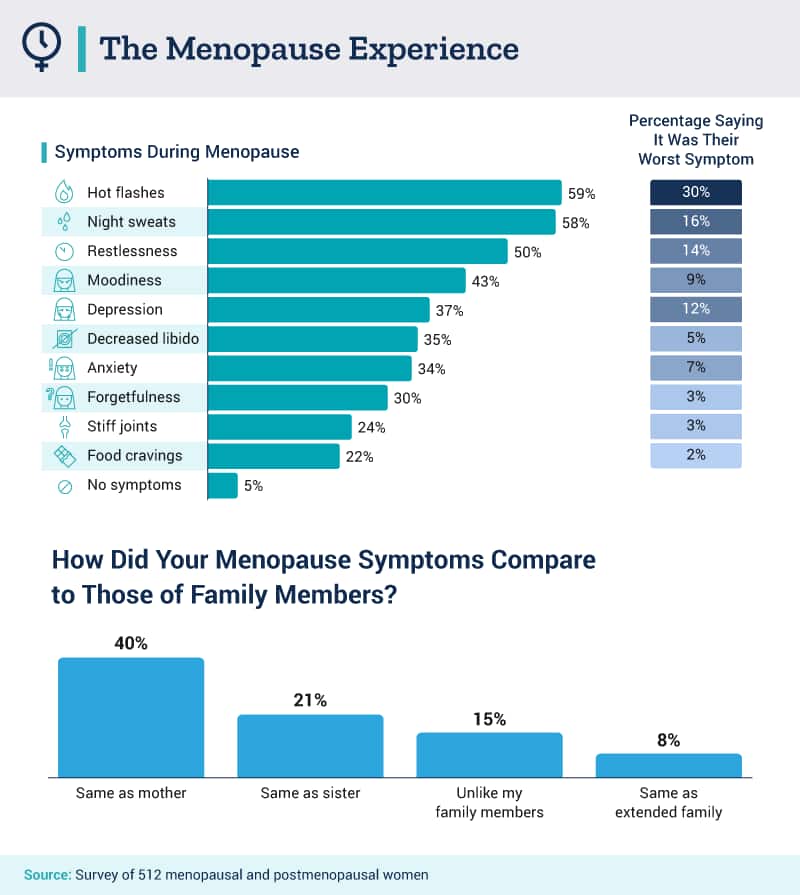 Decades of research on the menopausal transition have correctly identified the experience as a major milestone for women. The impact of menopause extends to biological, psychological, behavioral and social changes that impact nearly every facet of a woman's health and well-being from midlife on.

For many women, the word "menopause" is synonymous with the symptoms that manifest throughout the transition. According to the women surveyed, the most common symptoms were hot flashes (59%), night sweats (58%) and trouble sleeping (50%). For 30% of women, hot flashes were the worst symptom of their transition, followed by night sweats (16%).

How about the least common symptoms? Well, women were least likely to struggle with forgetfulness, stiff joints and food cravings during menopause.

For a majority of women, flavor cravings translated into wanting sweeter foods (59%), followed by salty (46%) and savory (25%) snacks. The most commonly craved food textures and temperatures included crunchy (48%) and cold foods (28%).

Unfortunately, indulging less didn't prevent weight gain for most women. A jump in the scale is typical during perimenopause and post-menopause, and it's not just the hormone fluctuations that are to blame for the creep on the scale. Other symptoms, including reduced energy and disrupted sleep patterns, can trigger weight gain as well. This measurable symptom of menopause impacted a majority of survey respondents. Among the 69% of women who identified gaining weight during menopause, the average increase was 18 pounds. And while 90% of women who gained weight reported trying to lose their added weight, 82% acknowledged shedding those pounds was harder than expected.

While not the majority, 31% of women polled reported that they did not gain any weight during menopause. This could suggest, that with proper nutrition and supplemental care for our bodies during this pivotal time, we can lessen the physical toll the change has on our bodies. 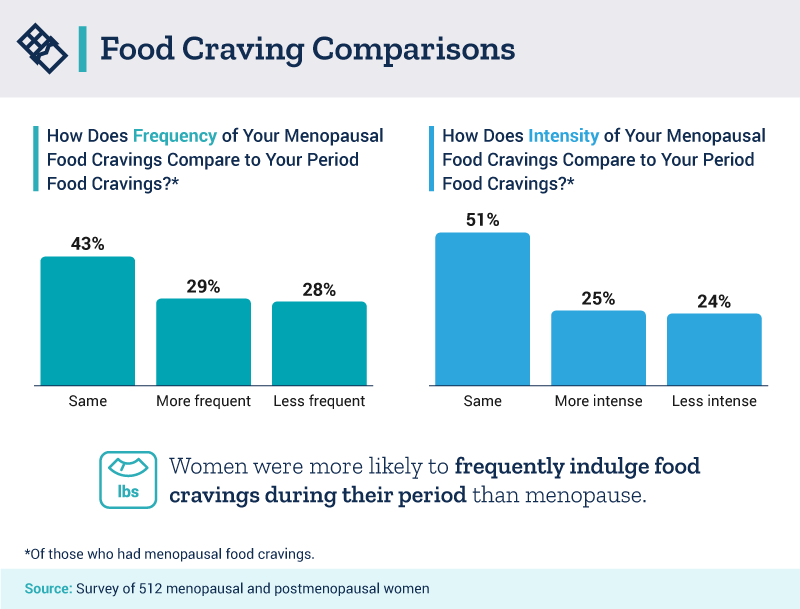 The survey brought bad news for younger women currently dealing with premenstrual syndrome hoping to get a break from PMS food cravings when they age. More than half of women who experience menopausal cravings (51%) reported the intensity of their food cravings as being equal to their appetites during their periods, while 24% reported them as more intense. Despite the similarities between the foods they were most drawn too, women were more likely to indulge food cravings while on their periods than during menopause.

Through all of these changes it can be difficult to stay positive about your body and your health, but it is important for women to be mindful and focus on their well-being during this transitional time. Research has suggested that mindfulness has reduced stress and symptoms in menopausal women. Being mentally healthy can help your body get through these changes with greater ease. 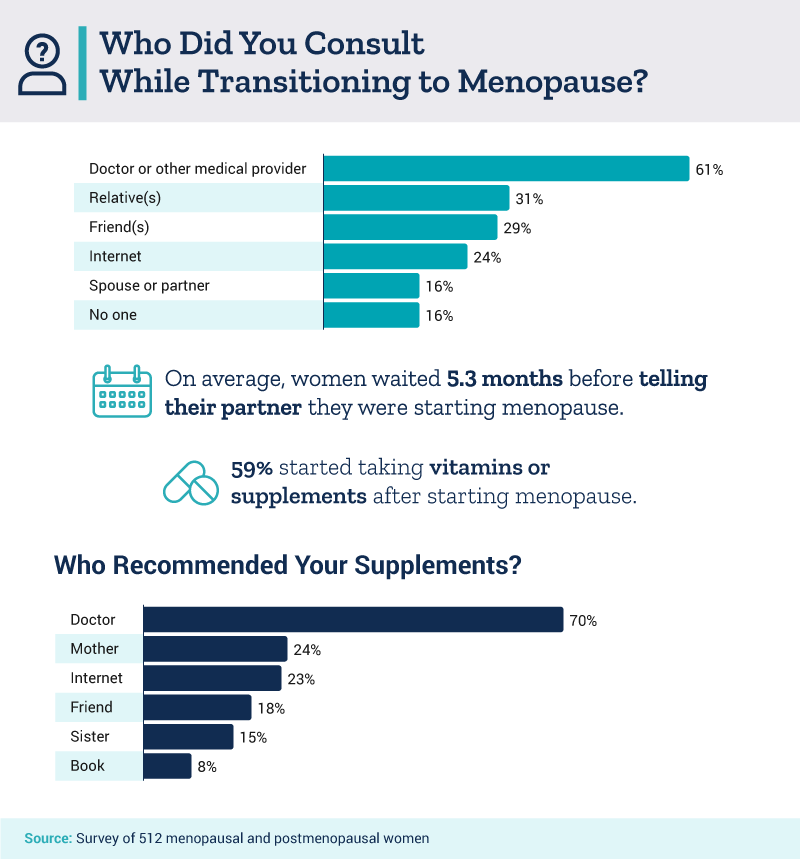 Between the physical manifestations of menopause and emotional and psychological symptoms, such as depression, this transition is a taxing time for many women—but 84% of women made sure to talk to someone while going through this shift in their life.

A majority of women, 71% in fact, told their spouse immediately that they were starting menopause. But there were some who chose to wait. On average, women who waited to tell their spouse reported waiting over five months before doing so.

The vast majority, or 61%, of women did consult a doctor or medical provider at some point during their transition, while 31% percent opted to turn to a family member, followed by 29% who consulted their friends and 24% who consulted the internet.

In the quest to alleviate the symptoms of menopause, typically women choose between two distinct approaches: a hormone-based regimen, or a natural, nonhormonal approach that relies on scientifically supported supplements. Our survey suggests that both women and their doctors are beginning to lean towards natural methods rather than relying exclusively on medication. More than half of women (59%) acknowledged taking vitamins after starting menopause, 70% of whom had supplements recommended or referred by their doctors. While hormone therapy, with its associated health risks, may be seen as the primary treatment for menopausal symptoms, these data points suggest that both women and the medical community are drawn to safe, more natural alternatives, including vitamins, minerals and dietary supplements.

At some point in their life, women experience the symptoms of menopause, and the availability of solutions that can help alleviate the full spectrum of those symptoms are severely limited. While standard treatments often rely on synthetic hormones and estrogen, research continues to indicate that some natural alternatives can provide relief for many of the most common symptoms, including hot flashes, sleep problems, depressive mood and mental exhaustion.

Exploring the Changes of Menopause